For a long time we've been in the dark about the problems and errors users had with granting access to camera and microphone devices. We knew there were occasional problems but we had no idea how often they were occuring, why, who was impacted and if they are avoidable.

More than 1 year ago we've taken taken the 1st step and tried to understand the type of problems a user could face. It was clear then there's no one simple answer.

A few months ago we've started logging these errors server side in a half baked attempt to measure their occurence. It didn't took us long from that 1st attempt to better understand the data, put it in a database and make it available - in a usable form - to our clients in their account area.

So today we're introducing a new Logs section that gives you access to all the successful and failed attempts to access the camera and microphone with getUserMedia().

The data is gathered from our HTML5 desktop recorder's attempts to access the camera and microphone, including when it is used inline on Chrome on Android.

The new Logs section is a very useful tool.

This post will go over the entire new section and help you correctly interpret the data, so let's delve right in.

All the gathered data can be found in the new Logs section. To access it, click the new Logs tab in the Pipe dashboard: 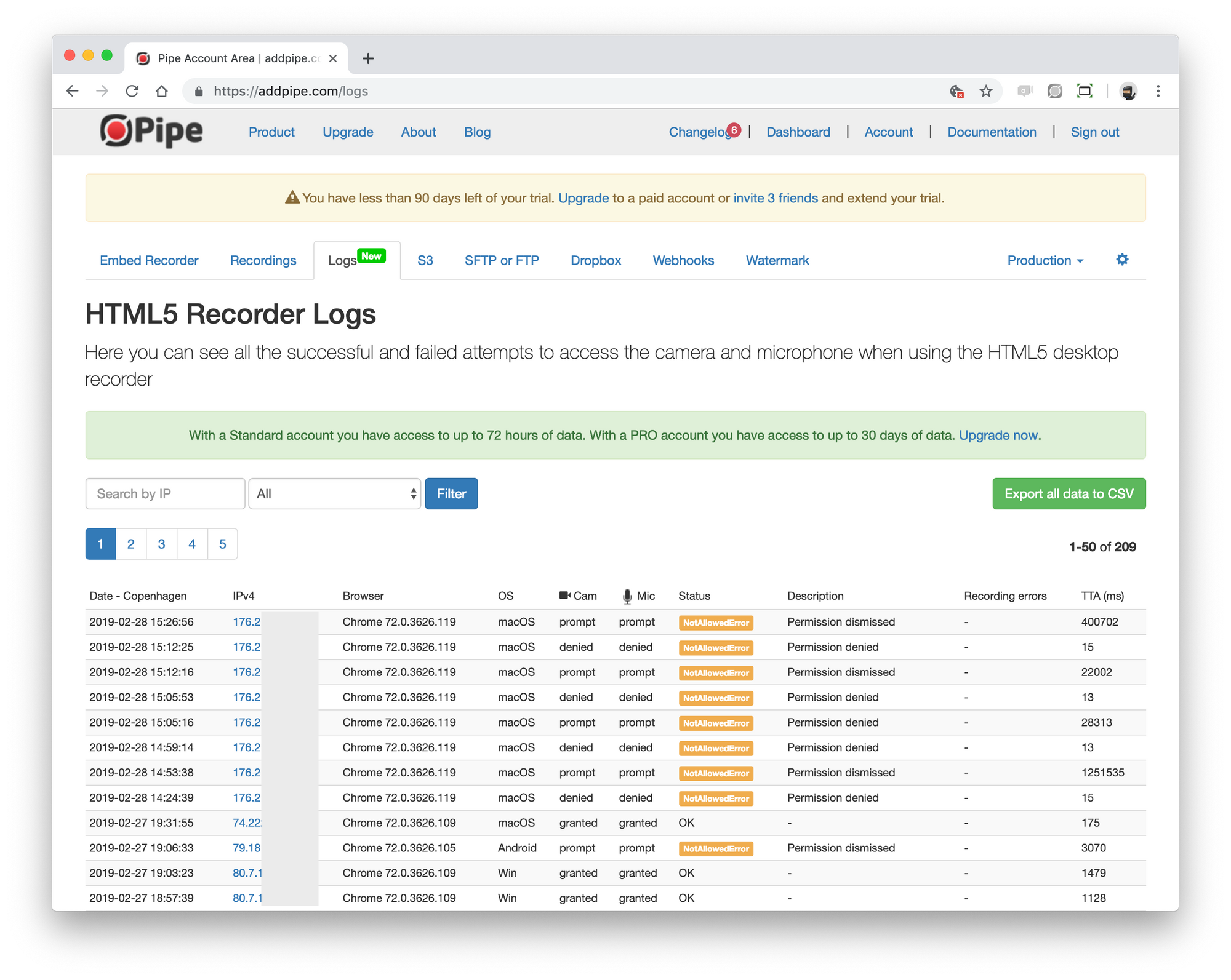 From left to right you will see the following data columns:

What does each column contain?

The IP address of the user's device. You can filter by IP by clicking on it or by using the search box located above. When a user emails you with a problem you can quickly see all their attempts to allow camera and mic access by filtering by their device IP. 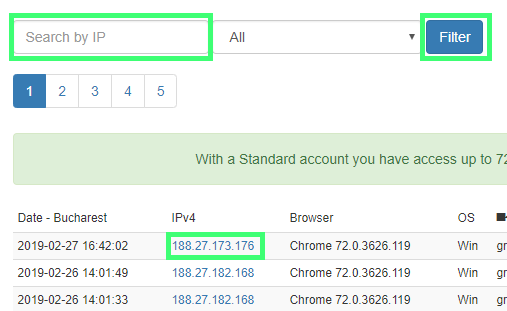 There is an additional drop-down menu to filter by error type. We will talk more about those below.

The Browser coumn gives you the browser & version.

In the OS column you'll see the usuals (Windows, macOS, Linux, etc.. ) and also Android if you have the inline desktop recorder activated for Chrome on Android.

Cam & Mic (permission ahead of request)

These 2 columns store the permission state of the camera and microphone BEFORE the actual getUserMedia() attempt to access the camera and/or microphone. This data is only gathered for attempts made on Chrome version 64 and up. Firefox and older versions of Chrome do not have the needed API to collect this data.

The possible values for the Cam and Mic columns are:

The Status column displays the result of the attempt to access the camera and/or microphone:

A legend with all the status types is also present at the bottom of the Logs page.

You can filter the logs by status type through the drop-down menu at the top. This can also be combined with IP filtering to get even more relevant results. In the example below I've made a search for all the NotAllowedError entries that were caused by a certain IP:

The Description column contains additional data about specific error types that help you better understand the circumstances of the error. This data can either be:

The Recording errors column stores errors that can be triggered AFTER a successful getUserMedia() attempt when recording:

TTA (time to action) represents the time (in milliseconds) between an initial getUserMedia() attempt and its result, successful or otherwise. This value helps you complete the picture of what happened:

If from the Date value you subtract TTA value you get the moment when getUserMedia() was executed.

Now that we've got a better grasp of the available data and its meaning, it's time to analyze it and see how we can extract meaningful analytics and relevant conclusions about different problems.

Accurate permissions data on Chrome allow us to calculate 3 stats for your environment:

You can find these stats shown for each environment at the bottom of the Logs page.

There's also an Export all data to CSV option, which allows you export all the data to CSV format and import it in Excel or Google Sheets to make your own analysis.

You can draw a lot of conclusions by looking at the data in the table. To get you started let's go in depth with the following log entries:

Reading from the bottom to the top (green > orange > blue) we can find out what happened when a user tried to record with the HTML5 recorder:

This are just a few examples of a number of possible scenarios, but they clearly demonstrate the usefulness of the logs when it comes to identifying a specific user issue.

We plan on adding more useful stats in the page to help interpreting the data, but we are also looking at gathering data about connection problems. Stay tuned!

Deconstruct
—
getUserMedia() Logs To The Rescue
Share this
Sign up for a 14 Day Trial
No credit card required.