We've first introduced the screen recording functionality in Pipe more than a year ago. It only worked in Chrome and it required a self published Chrome extension for the website where Pipe was embedded. We've built such an extension for interested parties to use but the entry cost in development time was still high resulting in only a few of our trial users & clients experimenting with the feature.

But now, with the release of Chrome 72 and Firefox 66, standards compliant screen capture without extensions is natively supported by the 2 major browsers.

So today we're updating the Pipe platform with the ability to record your screen on desktop devices in both Firefox and Chrome without having to worry about publishing a custom extension.

Turning on screen recording became a matter of option, not of careful custom development and extension publishing.

How to Turn On Screen Recording

When generating a new recorder embed code you can enable screen recording for that particular recorder from the options menu in the Embed section of your Pipe account dashboard: 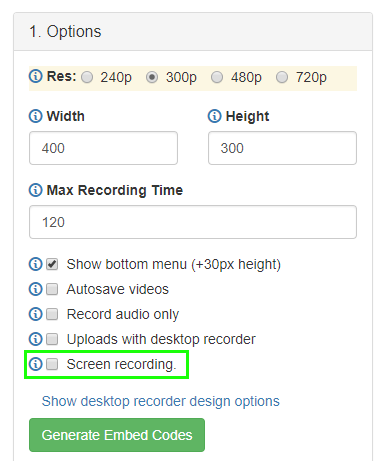 Once enabled, the Record Screen shows up:

For existing recorders you can :

Deconstruct
—
Screen Recording In Chrome and Firefox Without Extensions
Share this
Sign up for a 14 Day Trial
No credit card required.